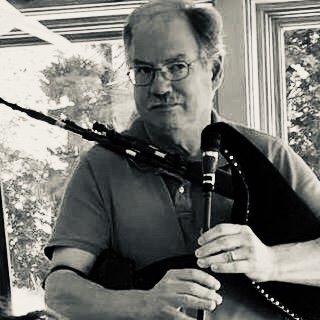 Robert Mitchell started his bagpipe adventure in Wilmington, DE when he was 9, under the direction of Robert Gilchrist. After spending a year in Scotland studying under the late John MacFadyen, he returned to the US and started teaching piping when he was a senior in high school. Later, Bob started a pipe band from scratch in Columbia, MD. Bob remaind Pipe Major of the Clan Campbell Pipes and Drums, which became the Dunloggin Pipes and Drums for 20 years.

As a solo competitor, Bob won most contests he entered, at least once, including the Clan Donald Quaich at Fair Hill, the Stone Mountain Invitational Piobaireachd, and the Open Piobaireachd at Maxville, Ontario. He was awarded the Wee Piper trophy at Grandfather Mt. Highland Games five times. This led to Bob being invited to perform for Dame Flora MacLeod’s 96th birthday celebration at the Waldorf Astoria.

For thirty years, Bob followed his passion for teaching as a Special Education teacher in public schools in Maryland. He retired from pipe band work in 1995, and pursued a career as a professional bagpiper, performing and touring with other folk musicians. He has recorded several CD’s with IONA and The Sound of Sleat. Ten years ago, Bob started studying the art and history of small piping.