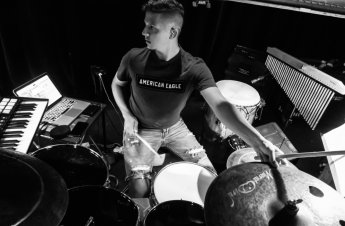 Born and raised in Puerto Rico, he comes from a family of musicians where his father's uncle was Ramoncito Rodríguez, musical director of the “Trio Los Andinos”. He started in music at the age of 5 playing in church. At the age of 7 he began his musical training in "the first Baptist church of Carolina" in Puerto Rico. After its development, he took private classes and later entered the school of fine arts in Carolina. In this institution, he attended his last three years of elementary school and decided to audition for one of the most important musical schools in Puerto Rico, “Ernesto Ramos Antonini, Libre de Música.” There he developed his skills as a classical and popular percussionist with his teacher Diana Valdés. In this school he had the opportunity to participate in different "master classes" of different recognized musicians such as: Humberto Ramirez, Giovanni Hidalgo, Eddie Montalvo and Julia Gaines. He participated with the symphonic orchestra of the school of music where he performed classical concerts, film concerts and with renowned artists such as Danny Rivera and Adlan Cruz. In turn, he was studying in the percussion ensemble of the preparatory school of the Puerto Rico Music Conservatory where he had the opportunity to develop for several years. After having graduated with excellence musical in the “Libre de Música” school, he did his professional courses in popular music at the Interamerican university campus Metropolitan with a Bachelor of Performing Arts with a 4 GPA average. He had the privilege of doing his professional training with teachers such as: David Rivera, Ricardo Pons, Pedro Rivera Toledo, Ramón Sanchez, all recognized teachers in Puerto Rico. He participated in the big band of said university where he had the opportunity to play with the great Eddie Palmieri and record for a “Banco Popular special”. Graduated from said institution in 2019. He has had the opportunity to participate as main drummer in theatrical and musical works, local bands doing music covers, jazz bands, graduation recitals and “batucadas” also known as samba drums used in festivals. Currently, he is a drum and percussion teacher and works in his own recording studio where he aspires to have his own business at some very near moment.