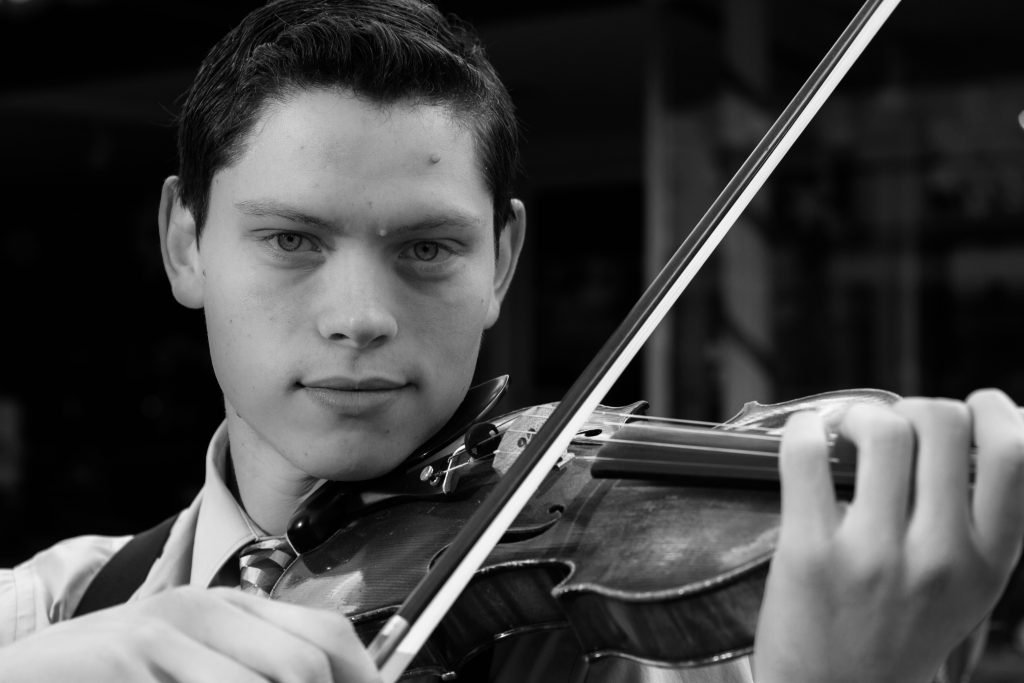 Eli’s musical journey began at the age of six in his hometown of San Diego, California. His ever-growing passion for music took him to the East Coast where he completed both his bachelors and masters degrees in violin performance at Shenandoah Conservatory, studying under renowned violinist Akemi Takayama. His studies have taken him across the country and internationally to countries such as Spain and Argentina. In Jamaica, he studied pedagogy with master teacher Steven Woodham, a pupil of Zakhar Bron, Europe’s leading violin teacher. While in school he served as concertmaster of the conservatory’s orchestra, and participated in numerous chamber music ensembles. He was invited to attend the Castleton Festival, an intensive opera and orchestra program directed by Lorin Maazel, the former conductor of the New York Philharmonic. He performs frequently in local orchestras including the Pro Arte Chamber Orchestra and the National String Symphonia, where has served as Assistant Concertmaster. As a soloist, he has performed numerous recitals in the Mid-Atlantic region. He was a featured soloist with the Charles Washington Symphony Orchestra, performing the virtuosic showpiece Zigeunerweisen. In 2014, he was a prizewinner in the Virginia Music Teachers Association concerto competition, and winner of the Bach-Handel competition at Shenandoah Conservatory.

Although his training is primarily classical, Eli has played in numerous genres ranging from Bluegrass and Celtic to jazz and classic rock. In college, he was a member of the Bluefire Jazz String Quartet, which performed both jazz classics and original material. The quartet had the honor to work with Wynton Marsalis, one of the greatest jazz musicians living today. He was also involved in the Shenandoah Conservatory Symphony Orchestra’s world premiere of Wynton Marsalis’ Blues Symphony. Eli’s love for folk music comes from his family heritage. His great-grandfather was a fiddler from the island of Cape Breton, Nova Scotia, and some of his earliest memories are of listening to his father’s recordings of Cape Breton Celtic music. He was honored to join Celtic Woman and the Irish Tenors as a member of the orchestra for their concerts in Shippensburg, Pennsylvania. In the classic rock genre, Eli has performed with a popular local band, including a sold out show dedicated to the music of the Beatles.

As a teacher, Eli has worked with students of all ages, from preschoolers to adults. He is the co-founder and director of the Charles Washington Youth Orchestra and the Lighthouse Baptist Church Children’s Choir. His passion lies in the opportunity to affect a student’s life in a positive way. He loves proving that they are capable of far more than they might imagine, teaching them how to learn, and enabling them to see farther down the road of learning. Through music, he shows them to always be curious, helping every student unleash their own creative spark and open the door to discovery. He believes that a teacher has an important responsibility that requires constant dedication, hard work, and self-evaluation to ensure every student gets the very best they deserve.